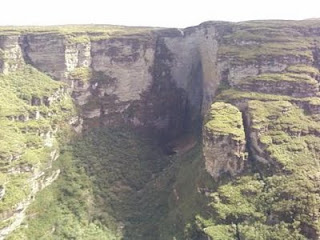 This is one of the most beautiful, and remote, views of Cachoeira da Fumaça (formerly Glass Falls). Even without water this waterfall is awesome. It's possible to reach this viewpoint in one, two or three days. We made it recently as a part of a four days trekking we call Fumaça Total because it's possible to see the waterfall from all viewpoints around, a experience few have had.
Posted by Unknown at 8:49 AM No comments:

Trekking Through the canyons of Chapada Diamantina: Fundão River Canyon and XXI Waterfall

The Fundão River is a tributary to the Ribeirão River, which is the river forming the Sossego Waterfall and one of the most famous near Lençóis. The canyon of the Fundão River is a beatiful and remote place.  Going up this canyon, passing through its waterfalls, is one of the most beautiful and challenging trekkings at Chapada Diamantina. Starting at Lençóis the trail goes up the Serra do Grizante. During this part of the trekking is possible to see Lençóis from afar, from some viewpoints at the trail and there is some scant debris of a plane which crashed there in the 80’s. The trail crosses rock outcrops full of rupicolous vegetation like bromeliads and orchids among others. After about one hour walking from Lençóis there is a small waterfall to relax. This trail is an old one which linked Lençóis to the Vale do Capão. It’s possible to see the remnants of the rock pavement used then.
Next we leave the main trail and go down to the Ribeirão River and after going downriver for some minutes we reach the mouth of the Fundão River. The canyon was already visible from the slopes we descended. Entering the canyon the hiking becomes more demanding, for we need to walk over stones in the riverbed for two hours until we reach the Poção Waterfall where we usually make a stop to relax at the pool and to have some snacks. After the Poção the trail becomes very scenic as we walk up the canyon until we reach the XXI after 40 minutes on average. There are good places to camp near this waterfall, it is also possible to sleep under stone ledges just by the river, looking to the waterfall, definitely a good option for full moon nights. The trail finishes at the vale do Capão, after passing by the viewpoint at the top of Fumaça Waterfall. This trekking is a bit demanding because of the riverbed walking and some steep parts after the Fundão Waterfall.  The difficulty of the hiking depends a lot on the amount of water in the river, less water, easier to walk. Sometimes when the river is too full it could be dangerous to go up the canyon. Notwithstanding if one is careful and aware, this is for sure, one of the most beautiful trekkings through the canyons of Chapada Diamantina. Check out more photos at the link Fundão and XXI Waterfalls
Posted by Unknown at 10:38 AM No comments: