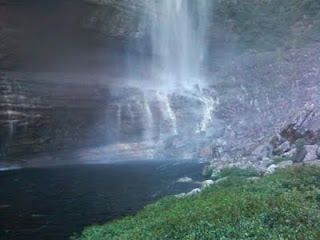 I will take the risk and say that Chapada Diamantina is the best trekking and hiking place in whole Brazil. Of course, many won’t agree, but many will. And I bet that those that don’t think so have never been to Chapada. Is a bit hot for those not used to it? But the numerous waterfalls and pools along the trails make the effort easy to bear. Following through old miner’s trails it’s possible to walk days on end, linking canyon after canyon, plateaus after plateaus. From one day hiking to long trekkings, the landscape is amazing and the experience of arriving at a remote waterfall after hiking through an alluring canyon is unforgettable.
The trekking to Fumaça Waterfall is one of these classic treks. There is more than one way to go to the pool of Fumaça Waterfall, it depends on the number of days one has to spend and of course, on the disposition to walk a lot and scramble a bit.
Last time I did it we leaved Lençóis by the morning and took the trail, which is the same of Ribeirão do Meio, until the beginning of the Serra do Veneno. This is a sometimes steep, sometimes not so much, trail which leaves the Ribeirão River valley and go to the Murissoca River. After crossing the Murissoca river, in half an hour we rested a bit at the Mirador Toca da Onça, then follow to Palmital Waterfal where we made camping.
Next day we went to the Toca do Macaco, a camping ground with stone ledges and a small cave. It’s an amazing place to make camping, but unfortunately sometimes there are too much people, which can spoil the experience of remoteness. But outside the big holidays this kind of situation is quite unlikely to happen.
From there we went to the pool of Fumaça only with day packs, in two hours. After relaxing there we came back in another two hours to the Toca, where we made camping for the second night.
After a good rest, by the morning of the third day we went up the Serra do Macaco, for me the most demanding part of the whole trekking. Looking to the good side of things the landscape is enthralling and there is a view to a huge valley looked upon by a huge monkey profile, or gorilla profile if you think is more thrilling. This amazing rock formation gives the name to the Serra do Macaco (which means Monkey Hills).
But as always, no problem, after some time going up through this steep trail we arrived at the Santuário, a resting place by a small river with a refreshing pool. To close this amazing journey we followed to the Vale do Capão for beer and snacks. It is worth remarking that is possible to visit also the top of Fumaça Waterfall in this trekking, before going to Vale do Capão, since it is very close to the trail we take to go to the valley coming from Serra do Macaco.
Check out more photos at my Picasa album through the link:
https://picasaweb.google.com/116391002187238768414/PocoDaCachoeiraDaFumacaPoolOfFumacaWaterfallTrekkingThroughTheCanyon?authkey=Gv1sRgCNuqsa3xvJmCWA&feat=directlink
(The album legends are bilingual Portuguese/English)